This article was originally posted on Money Magazine

Three years ago, Dan Stelmach was stuck in a sales job he didn’t like, trapped by the $850 student debt payments he had to make each month.

He’d barely made a dent in his debt principal, despite nearly three years of repayment. Many of his friends were in the same boat.

“There needs to be something I can do to get me out of this debt sooner without changing everything about my life,” he remembers thinking.

That ‘something’ was spare change.

Stelmach teamed up with his brother, Nick Sky, to create ChangED, an app that rounds up your everyday purchases and uses that money to pay down student loans.

Since launching in early 2017, the brothers say ChangED has made a combined $2 million in student loan payments for its customers. The company got a big boost last year, after appearing on Shark Tank and snagging an investment from Mark Cuban.

ChangED relies on conventional personal finance wisdom: If you can automate your savings, you’re more likely to be successful. It’s a similar philosophy that powers other passive savings apps like Chime, Digit, or Qapital. You don’t have to repeatedly make a prudent financial decision to put extra money toward your student loans. Instead, the app does the work for you.

“Our intention wasn’t to change (users’) behavior but to align with their behavior for the betterment of their financial health,” Sky says.

The set up is straight-forward. You link whatever spending accounts you’d like it to track for round ups, and ChangED walks you through the process of identifying your account number and loan terms with your servicer, which you also have to share with the app. (A note here: You have to provide your bank login credentials, a practice banks and privacy experts largely frown upon, despite how common it is with money management apps. Some banks say there’s little they can do if your account information is hacked from a third-party app. ChangED says it uses an encryption service and that it doesn’t ever see users’ account information or store personal data.)

If you use a credit card for everyday spending, you can link that as well, though you’ll have to set a checking account as the “funding account” to pay for those round ups. In other words, the app won’t add an additional $0.50 charge to your credit card when you buy a $2.50 coffee, instead it will pull that $0.50 from your checking account.

Once you hit $5 in spare change, the money is transferred to a savings account held by the app. And once that account hits $100, ChangED sends a payment to your loan company on your behalf. The service costs $1 a month.

Users save an average $50 a month, meaning they’re making extra payments on their loans every couple of months. At that rate, a borrower with $37,000 in loans could shave 8 years off their repayment and reduce the total balance they’d pay by $14,000, ChangED estimates. (Those savings are based on a 6.8% interest rate and a 25-year repayment plan, both of which are too high if you only have recent federal undergraduate loans, which have interest rates ranging between 4% and 5%.)

Early reviews of the app in the ITunes and GooglePlay stores were mixed. People loved the idea, but were frustrated with glitches. Stelmach says they focused on improvements to the user experience in 2018, and most bad reviews stem from issues users run into when they try to connect their bank account to the app. Recent feedback on the app stores has been more positive.

Alex Weber, who’s been using the app since October, is happy with it. The 30-year-old finished her degrees with roughly $50,000 in debt, after earning a bachelor’s in marketing and an MBA. So far, she’s saved enough to make three extra payments on her loans.

“I can’t say enough good things about the app,” she said in an email. “It has motivated me to find a way to pay these loans off by 35.”

Since launching, ChangED has added some enhanced features, including a ‘boost’ function where you can throw an extra $5 to $20 toward your loans whenever you feel like it. They’ve also added a ‘family and friends’ function, where others can link their spending accounts to your loans.

That’s helped Johanna Williams trim her debt faster. She’s saved up enough for four payments on her own, and once her husband started using the app, that added an extra $100 to her payments. She could probably save that money on her own, she says. But this way, it’s effortless.

Sky and Stelmach say their long-term goal is to grow ChangED into a home base for all things student loans. The website already has a dictionary of loan terms and walks users through different types of loans. In the future, they’d like to add resources for student loan refinancing and tools to help save for college.

“We’ve had clients who’ve paid off their own loans, and then they come and ask about saving for college, because they don’t want their kids to go through what they did,” Stelmach says.

Stelmach says he and his brother are trying to make paying off your loans at least a little fun. They love when they hear from customers rave about filling up their squirrels—the ChangED logo that also serves as a type of virtual piggy bank on your app’s homepage. 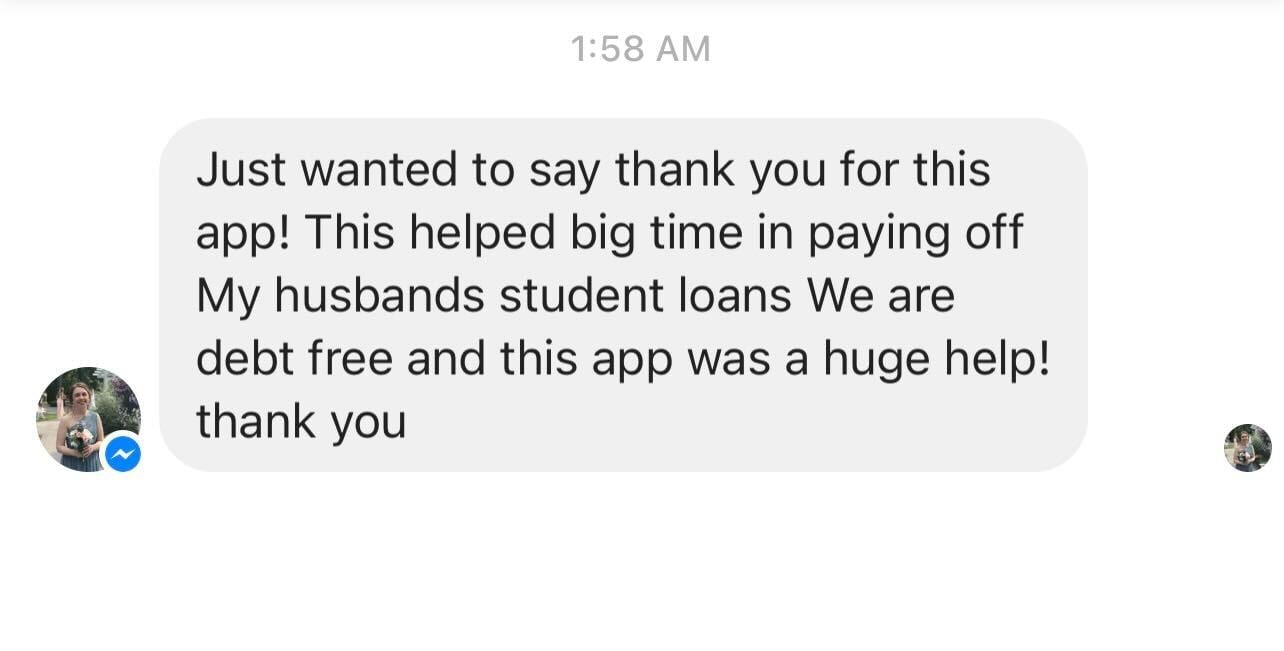 Why debt repayment needs to be Changed

Mortgage Pay Off Is Here, By Popular Demand